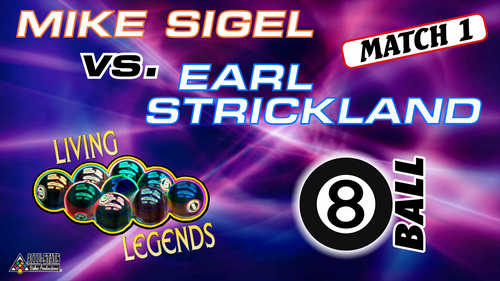 MATCH #1: 8 BALL: Earl, having recently won an event in Europe. was in a much more competitive form and totally dominated the opening 8-ball encounter. Mike, realizing just how out of assault-stroke he actually was, let us into his outermost thoughts.

Accu-Stats introduced what turned out to be, as Mike Pannozo at Billiard Digest, "The most entertaining way to watch pool ever"
What's so different about this one-on-one? Both players have open wireless microphones strapped to their hip.
Pat Fleming compounded Pannozo's observation, "It's not so much about the score, it's about the banter!"
And the banter got more acerbic, and profane, as "Mike the Mouth" struggled in the opening disciplines. Earl, no stranger to sharing his pearls of wisdom with the crowd, soon responded in kind.
So beware, the unexpurgated version gives new meaning to "colorful" commentary.
And, now that you have been made aware that this may not be your usual sedate, and sanctified, Accu-Stats commentary, let's get to the six discipline format of the first ever LIVING LEGENDS CHALLENGE.
Six disciplines are 8-Ball, 9-Ball, 10-Ball, Straight Pool, One Pocket, and Banks. After six matches, if a player has fallen too far behind, in an offer of the opportunity of redemption, he gets to choose the next game.